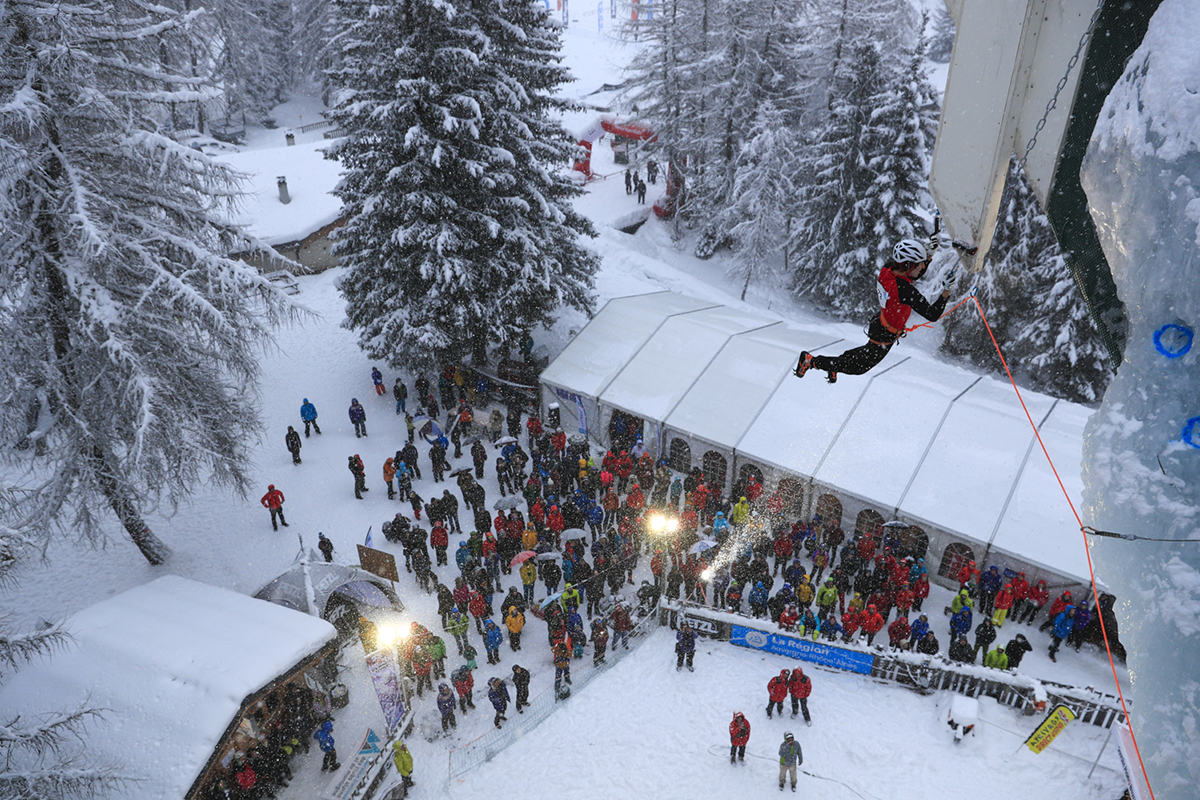 The biennial UIAA Ice Climbing World Championships – the pinnacle event in the UIAA ice climbing season – was held from 4-5 February, 2017 in Champagny-en-Vanoise, France.

Prevailing from a field of over 125 athletes from 26 countries were Russian athletes Pavel Batushev and Maria Tolokonina in speed and South Korea’s HeeYong Park and Woonseon Shin in lead.

Lead: Down to the wire

72 men and 34 women started the lead competition on the famed ice structure of Champagny-en-Vanoise on Saturday. Only two would walk away from the French Alps with gold medals around their necks. By Sunday afternoon’s Finals, held under a deluge of snow, the field had been whittled down to eight men and eight women. The men’s finals welcomed athletes from six different countries – Iran, Russia, Slovenia, South Korea, Switzerland and the Ukraine. On a route which demanded moves to be executed with precision and at a relentless speed, Russia’s Alexey Dengin set the standard with an impressive first climb. That was until the fifth athlete on the wall, HeeYong Park, 34, winner of the recent UIAA Ice Climbing World Cup season in lead, produced a display of dynamic, deft and dazzling ice climbing. Park was the first athlete to complete the course and with 46 seconds to spare. A marker was laid. Then came Nikolai Kuzovlev (RUS) who, after failing to podium in the speed competition, started like a man possessed. With just the last hold separating him from the top and at a speed faster than Park, a missed undercut proved fatal when he seemed ready to assume leadership of the competition. Only the last athlete to climb – 19-year old Swiss climber Yannick Glatthard – could oust Park from pole position. In a performance which showed great maturity and concentration, Glatthard produced a silver medal display in completing the climb albeit shy of Park’s time. Gold for Park, silver for Glatthard, bronze for Kuzovlev. Park succeeds Maxim Tomilov of Russia as World Champion. Tomilov’s title defence surprisingly ended in the qualification stage. The final eight women hailed from five countries – Ireland, Italy, Russia, South Korea and Switzerland. The major turning point in the competition came when Han Na Rai Song (KOR), currently ranked number 1 in the world and fresh from three World Cup gold medals, fell shortly into her climb. Misfortune which opened up an opportunity for the pursuing athletes. Fresh from winning a world title in speed, Maria Tolokonina produced a stunning performance only to fall when about to make her final clip; Italy’s Angelika Rainer with a measured, controlled and technically flawless climb reached the top. Only defending World Champion Woonseon Shin, 36, could now defeat her. Shin had to top the course and in a faster time than Rainer. The tension was palpable. Climbing with confidence and remaining unflustered by the pressure, Shin narrowly finished the route faster than Rainer. Gold was hers and in the process she defended the world title she won two years ago in Rabenstein. An outstanding Rainer claimed silver; Tolokonina bronze, no small feat for an athlete who had spent the morning dominating the women’s speed competition.

The women’s competition welcomed 21 athletes from 11 countries. By the final stages it became clear that the winners would hail from Russia.

The deciding showdown was between Maria Tolokonina and Ekaterina Feoktistova. Tolokonina, 29, with climbs of 8.76 and 11.77 defeated her younger rival by a combined 1.24 second margin over the final two duels. Victory marks the crowning achievement for Tolokonina after a tremendous past two seasons. She finished the 2016 UIAA Ice Climbing season as the female world number 1 in lead and speed, and closed the most recent season as joint world number 1 in speed.

The men’s competition comprised 52 athletes and the final was always going to be close. Kartashev, 24, and Batushev, 29, were the top ranked athletes going into the competition. Batushev with times of 6.68 – the second fastest of the weekend – and 7.21 took gold by 1.20.

Tolokonina and Batushev succeed Alexey Vagin and Ekaterina Koshcheeva as UIAA Ice Climbing World Champions – a title they (like Park and Shin) will hold for the next two years. 45-year old Vagin returned to competition in Champagny after a brief hiatus and lost out to Batushev in the last eight of the men’s speed duel. Koshcheeva’s title defence ended in the semi-finals of the final round against Feoktistova. In the 3rd v 4th place climb she lost out to Nadezhda Gallyamova who took bronze. The men’s bronze medal was won by Leonid Malykh over Radomir Proshchenko.

All the videos, all the action from Champagny-en-Vanoise

The UIAA thanks all local organisers, including la Fédération française des clubs alpins et de montagne (FFCAM), for their hosting of an excellent event.

For all results from the 2017 UIAA Ice Climbing World Championships click here.

Pictures from the 2017 UIAA Ice Climbing World Championships are available on the UIAA Flickr channel. Images can be used for editorial purposes providing the full copyright is used.