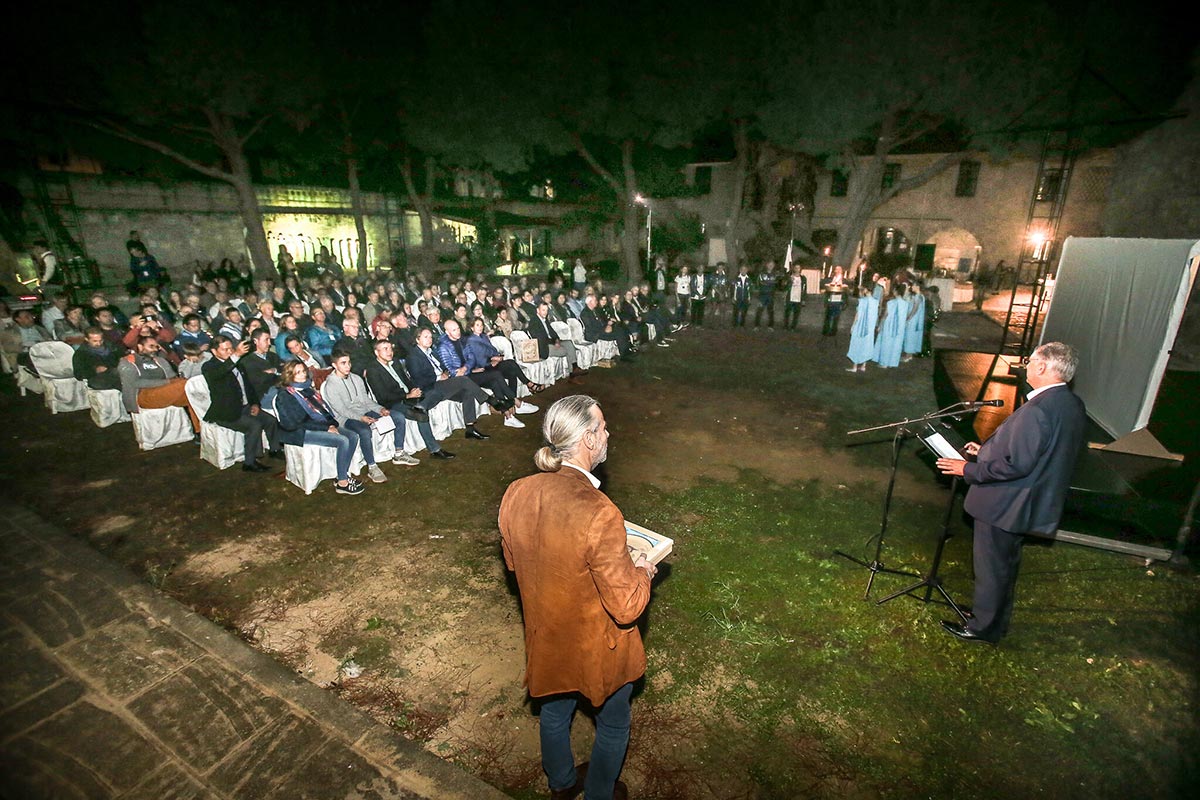 The 2019 UIAA General Assembly, hosted by the Cyprus Mountaineering Climbing & Orienteering Federation, was held in Larnaca and Ayia Napa, Cyprus on Saturday 2 November. Delegates from 51 member associations and 42 countries were present.

Following opening addresses from the President of the Cyprus Olympic Committee, Mr. Dinos Michaelides, and the Sport Advisory of the Republic of Cyprus, Mr Phivos Zachariades, UIAA President Frits Vrijlandt presented key points from the 2018 Annual Report (AR). The full digital version of the AR can be viewed here. Vrijlandt also introduced the final year of his Presidency. His second four-year term ends in October 2020.

UIAA General Secretary and Treasurer Peter Muir presented both the 2018 and 2019 budgets and the 2020 budget forecast. While confirming that current losses were not sustainable, Muir remarked that budgeting provisions for 2020 were encouraging.

The UIAA EB (Executive Board) and MC (Management Committee) proposed new membership fee categories (Annex 1, AoA) for smaller national federations. This was approved and will open the possibility of UIAA membership to more federations worldwide. No new applications for UIAA membership were received for GA 2019 meaning the current number of members – 87 associations from 67 countries – remains the same.

Significant time was dedicated to UIAA Executive Board and Management Committee elections. Thomas Kähr, after seven years as an EB member, stood down from his position to take over Presidency of the International Ski Mountaineering Federation. The UIAA thanked the Swiss national for the energy and dedication he has brought to the role including the past year as Vice President. Three Board positions were filled. Zoljargal Banzragch (Mongolian National Climbing Federation), Mahmood Hashemi (Iran Mountaineering and Sport Climbing Federation) and Lode Beckers (Climbing and Mountaineering Belgium) join existing EB members – Vrijlandt, Muir, Helène Denis and Yongfeng Wang.

The new EB composition is as follows:

More specific details – including Board links for Commissions – will be communicated shortly.

A motion by the German Alpine Club (DAV) on climate change was unanimously approved. Further details can be found here. As well as fully supporting the DAV motion, the UIAA also stressed the longstanding work it has dedicated to the subject including signing MoUs with key international parties and UN bodies (UNEP and UNFCCC). The UIAA Mountain Protection Commission is also working on Sustainability Guidelines related to climate change (guidelines will include travel/event planning advice, a UIAA internal climate change policy and an assessment of an acceptable carbon footprint baseline). The UIAA was also a leading voice at COP21, the United Nations Framework Convention on Climate Change. Together with experts, the UIAA proposed a ‘Declaration on Mountain Change for COP21, ensuring the vulnerability of mountains is recognised in the final Paris Accord’. It can be viewed here. The UIAA plans on releasing a dedicated news statement on Climate Change on International Mountain Day, 11 December.

Greg Moseley, Mountain Club of South Africa, presented details about the creation of a High Mountains Working Group, endorsed by the EB to focus on the issues facing the high mountains of the world. This group will continue to work with key stakeholders including member federations and local bodies to recommend policy. Please refer to recent statements published by the UIAA on Everest and Kilimanjaro.

For the first time, the UIAA GA was attended by a representative of the International Olympic Committee (IOC). Irina Gladkikh, IOC Associate Director Winter Sports and Recognised Sports and IF Relations, presented three topics – the Olympic Agenda 2020, Gender Equality, New Norms. Her presentations will be made available in the Members’ Portal.

Thomas Kähr’s final act as UIAA Vice President was to provide updates on the progress of the Strategic Working Group (SWG), who released the latest version of its proposals to revamp the UIAA ahead of the GA. The day before the GA, the UIAA Management Committee discussed a number of the proposals and made recommendations. Two areas of the report were voted on – and approved – during the GA. The first was the new UIAA profile which reads:

The UIAA is the International Climbing and Mountaineering Federation. As the leading global network, we promote climbing and mountaineering and advocate for access to climbing areas and mountain ranges. While looking to our future, we value our heritage and care for the mountains, their fragile ecosystems, vulnerable communities and cultures. We serve the best interests of our member federations and of our worldwide community. For the mountains. For the World.

Members also agreed on the division of the following Strategic segments of the UIAA:

The GA concluded with the traditional Gala dinner and Award ceremony. During the Ceremony, Dr Lee’s honorary membership was celebrated; Thomas Kähr was commended for his commitment to the UIAA and two member federations received Awards for celebrating significant milestones in 2019: 50 years of the Chinese Taipei Mountaineering Association (CTMA) and 150 years of the German Alpine Club (DAV). The following announcements were also made: Shortly after the confirmation of the 2019 UIAA Mountain Protection Award winner an exciting announcement was made regarding the future of the project. The 2020 and 2021 UIAA MPAs will be partnered by Bally, the Swiss luxury fashion brand, founded in 1851, with a pioneering heritage in climbing and mountaineering. Further details on the partnership are available here. Suru Boulder Fest, India, was confirmed as the winner of the 2019 UIAA Rock Climbing Festival Award (RCFA). The festival is supported by UIAA member association, Indian Mountaineering Foundation, with the latter’s Amit Chowdhury (also UIAA SafeCom President) accepting the Award on their behalf. The 2019 RCFA was only open to festivals from Asia. A full review, and details on the 2020 Award, can be found here.

As has become tradition at the UIAA General Assembly, Stephane Lozach’ meur, Petzl Foundation Project Manager, presented the progress made regarding the UIAA Alpine Skills Handbook. The project unites Petzl Foundation, the UIAA Training Panel, the UIAA Mountaineering Commission and UIAA members worldwide. Lozach’ meur confirmed that a new chapter on Canyoning has been produced. New agreements regarding translations were signed with Federació d’Entitats Excursionistes De Catalunya (FEEC), Mountaineering Federation of North Macedonia (FPSM) and the Indonesia Sport Climbing and Mountaineering Federation (FPTI). Translation in the following languages are in progress: Albanian, Farsi, Greek, Japanese and Romanian. The following languages are currently available: English (including digital version), Chinese, French, Korean, Mongolian and Turkish. The following languages were printed for the first time in 2019: Czech and Serbian.

Other Meetings
Ahead of the GA, the UIAA Executive Board, UIAA Management Committee and Commission Presidents all held meetings. A UIAA Communication workshop was presented by Communication Manager Peter Bourne. At every GA, the hosts find new ways of offering delegates a diverse and interesting cultural programme. As well as offering a captivating insight into Cypriot music and dance, a number of delegates also enjoyed the island’s numerous rock climbing opportunities. Pavlos Georgiades, federation President, spearheaded a project focused on the history of the UIAA. Following months of dedicated research, Georgiades created a visual graphic tracing the key moments in the federation’s history. The end result was a giant banner which was also reproduced as a tablecloth gift for all delegates. Georgiades will share the visual with the UIAA Office so the project can evolve with members invited to offer new information, pictures and any amendments. The UIAA will look into creating a digital version of the graphic and updating the visual for each GA. The UIAA thanks Georgiades for this initiative and hosts CMCOF – Cyprus Mountaineering Climbing and Orienteering Federation – for its excellent organisation of the 2019 GA.

The 2020 GA will be held in Antalya, Turkey on 24 October and hosted by TDF – Turkish Mountaineering Federation.

Further Resources:
Photos from the GA can be found here.
Minutes and presentations from the GA will be distributed in due course.