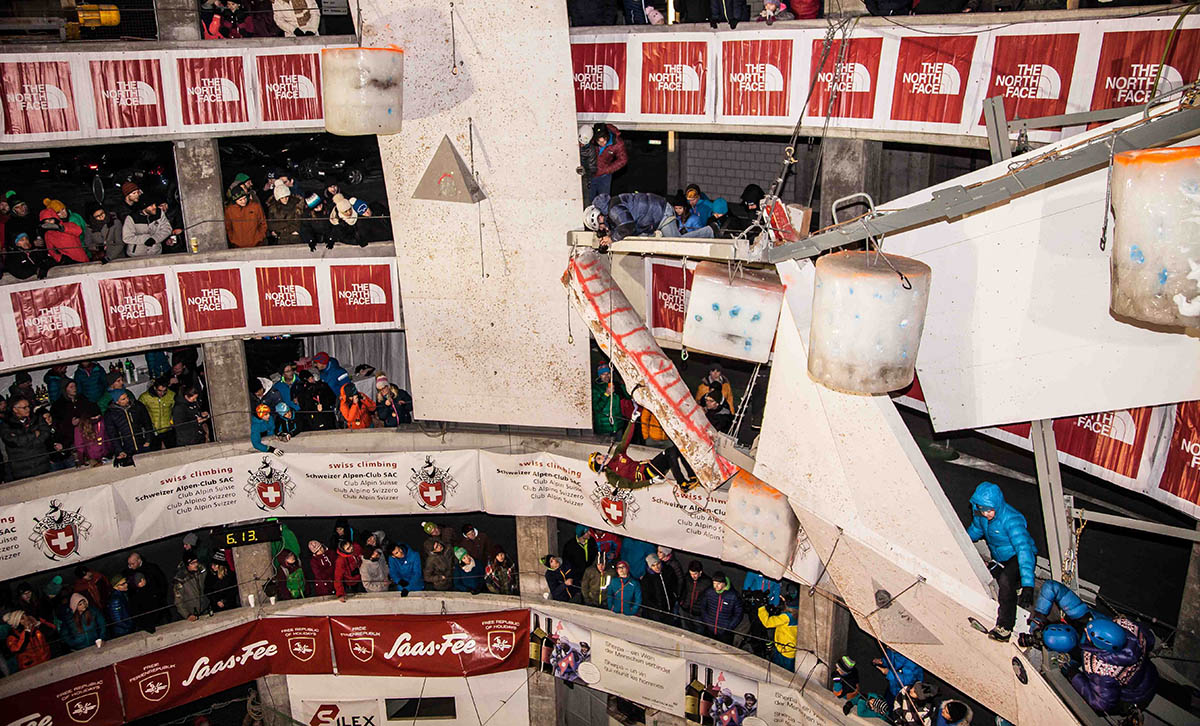 Switzerland is the first stop on the UIAA Ice Climbing World Tour
partnered by The North Face Korea.
World Cup event in the sublime Swiss Alps from 18-20 January.
Livestreaming of semi-finals and finals in lead and speed.

“This is a location unlike any other in the world,” explains Kurt Arnold, President of the Organising Committee for the Swiss leg of the UIAA Ice Climbing World Tour. “We have the resort of Saas-Fee, the 4000m peaks, high glacier climbing and a unique venue in a parking!”

Arnold is right to point out Saas-Fee’s undisputed charms and appeal as an ice climbing venue. The resort is the ideal location to explore the Swiss Alps and the gateway to endless mountain activities. As an ice climbing venue it has two decades of experience as a World Cup location offering athletes fantastic technical routes and great training facilities. What is especially unique about Saas-Fee is the ice dome itself. Located at the foot of the resort parking its spiral levels offer numerous vantage points for spectators to watch athletes ascend the wall. For Friday’s speed finals and Saturday’s lead competition the public turn out in force. “Spectators give the climbers a lot of extra power,” adds Arnold. “The event itself is a great mix between ice climbing, a big show and a crazy party afterwards.”

Action in Saas-Fee begins on Friday with the lead qualifications and the speed finals. On Saturday the lead competition concludes with the semi-finals and finals. The full programme can be viewed here.

Saas-Fee marks the first juncture in the 2018 UIAA Ice Climbing World Tour. It will be followed by competitions in Rabenstein (Italy), Hohhot (China), Cheongsong (South Korea) and Kirov (Russia). A full preview of the season can be found here.

The international pool of athletes expected to start in Saas-Fee comprises ice climbers from over 20 countries. Host country Switzerland is well represented with seven male and six female athletes. This includes the multi-talented Petra Klingler and twins Lukas and Sina Goetz, all sure to get a warm backing from the home crowd.

Results, registered athletes and start lists will be available here.

A press release review of the event in Saas-Fee will be available on 22 January, 2018.