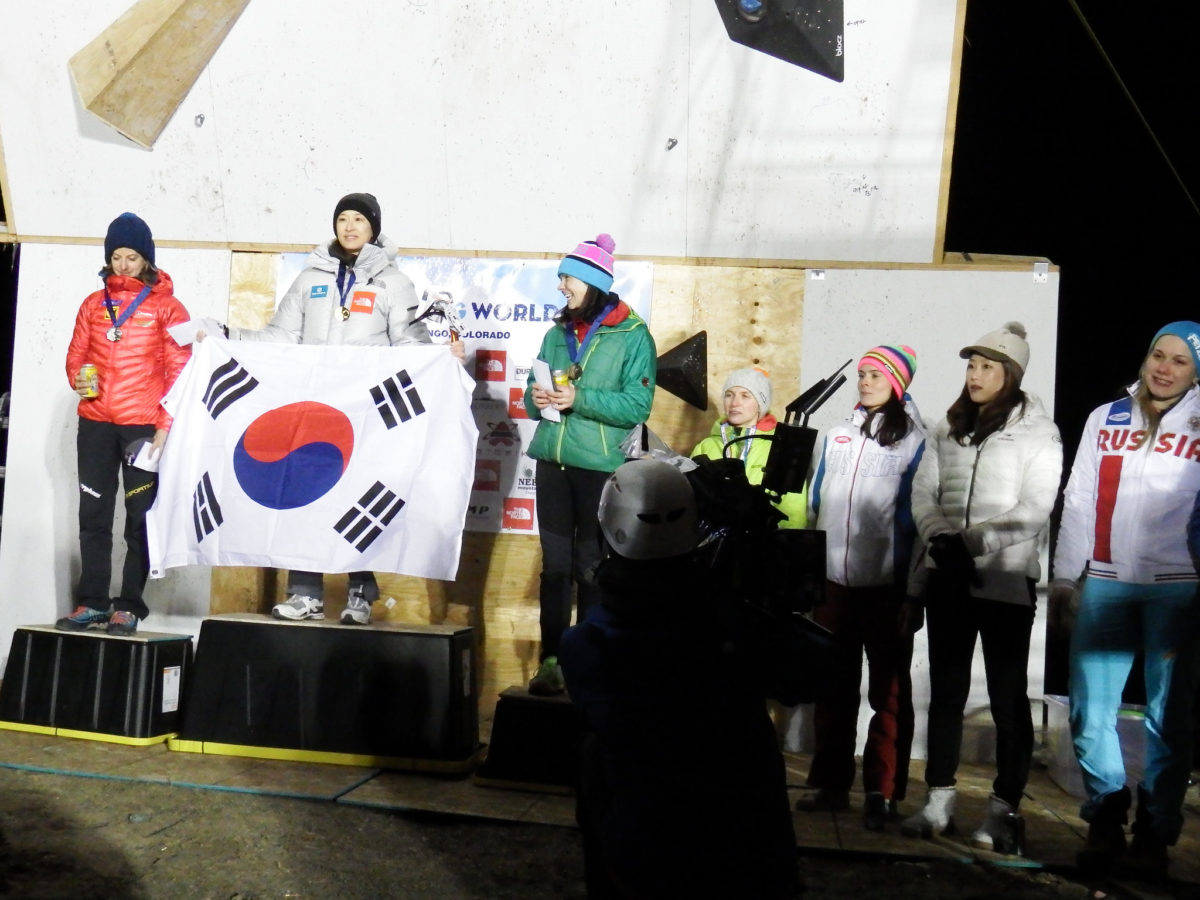 The 2017 UIAA Ice Climbing World Tour, supported by The North Face Korea, is underway. And in some style.

The Ska Brewing Company in Durango, Colorado (USA) hosted the first event of the season, a World Cup event in lead, on 16-17 December. Finding themselves on top of the podium at the end of two days of absorbing and rainsoaked action were South Korean athlete Shin Woonseon and Russian Alexey Dengin.

Action at the first event of the season was as dramatic as the weather which reserved horizontal rain, hail, snow and gale force winds creating less than optimal conditions for spectators and challenging elements for competitors from 13 countries. In Friday’s semifinals, routesetters Pavel Dobrinskiy (RUS) and Kim Jong Heon (KOR) created very powerful test-pieces on the 12m overhanging structure. Explosive moves from the off created sequences that many athletes found challenging and in many cases, attempts were over quickly. Stand out semi-final performances came from the young Canadian, Noah Beek and Korean-resident Emir McSwiggan (IRL) who both climbed extraordinarily well finishing their semi-finals in fourth and second respectively, personal bests in their competition career so far.

“I didn’t expect to go so good today,” explained Beek on his semi-final display. “The semi-final route was incredibly hard, powerful and technical and I think a lot of people found that the same way. A lot of the moves were very big and to deal with that you had to get your feet uncomfortably high.”

Going into the finals there were some notable names missing. Sergey Tarasov (RUS) and Yannick Glatthard (SUI) both failed to qualify from the semi-finals. Ekaterina Vlasova (RUS) fell low down on her semi-finals and Ineke Rhebergen (CAN) was extremely close to qualifying, showing how hard she has been working in the off season.

Saturday’s finals took place separately with women climbing first. On arrival at route observation, they found the competition structure extended, this time by two, huge, free-hanging cubes. The routesetters this time took advantage of the extra space and created meandering courses that weaved around the whole surface of the wall, with more emphasis on sustained technical climbing rather than pure power.

With more shock exits low on the route, last year’s overall World Cup season winner in both lead and speed Maria Tolokonina (RUS), fell off one of the first moves and South Korean star HanNaRai Song stumbled about a third of the way into the route after her foot popped out of the ply; both of which meant the field was wide open for the rest of the competitors. Russian athletes, Nadezhda Gallyamova and Maryam Fillipova  both put in strong attempts but couldn’t do enough to secure a podium position. Instead, it was Eimir McSwiggan, Angelika Rainer (ITA) and reigning World Champion Woonseon Shin (KOR) who climbed furtherest taking 3rd, 2nd and first places respectively with dramatic falls and core sapping finishes from all three.

Climbing first in the men’s category was the charismatic HeeYong Park (KOR). Park fell at the top of the main structure, pulling through one of the more powerful moves, a position that Beek matched, with massive support from the home crowd. In complete contrast to the women’s competition, where no Russian athletes made the  podium, in the men’s it was the Russians who completely dominated. Last year’s overall winner in both speed and lead Maxim Tomilov took third place behind Nikolai Kuzovlev in second. First place was decided in an incredibly exciting finish, with Alexey Dengin, climbing last, displaying supreme athleticism, composure and crowd-pleasing tactics to take his first ever UIAA Ice Climbing World Cup medal. Delivering under true pressure.

Athletes and officials will now enjoy a quick break for the holiday period before reconvening in Beijing for the second event of the season from 7-9 January. There follows an intense month of action, concluding in early February with the World Championships in Champagny-en-Vanoise, France. Full details on the UIAA Ice Climbing season, sponsored by The North Face Korea, can be found here.

Livestreaming was provided from the semifinals and finals of both the men and women’s competition. It is available to replay on the UIAA YouTube channel and on the UIAA Facebook page.

Livestreaming and video highlights were provided by QTV Sports with Liam Lonsdale as host and presenter. This season the UIAA is adding even more content and higher production values to the ice climbing season. Watch our for behind the scenes footage, interviews and live productions from all events. Ice climbing highlights will also be available on the IOC’s Olympic Channel.

Images from the event can be viewed and downloaded from the UIAA Flickr channel.

In between competitions, the international ice climbers shared their own perspective from competition. Full results from Durango can be found on the UIAA livestreaming and results centre.