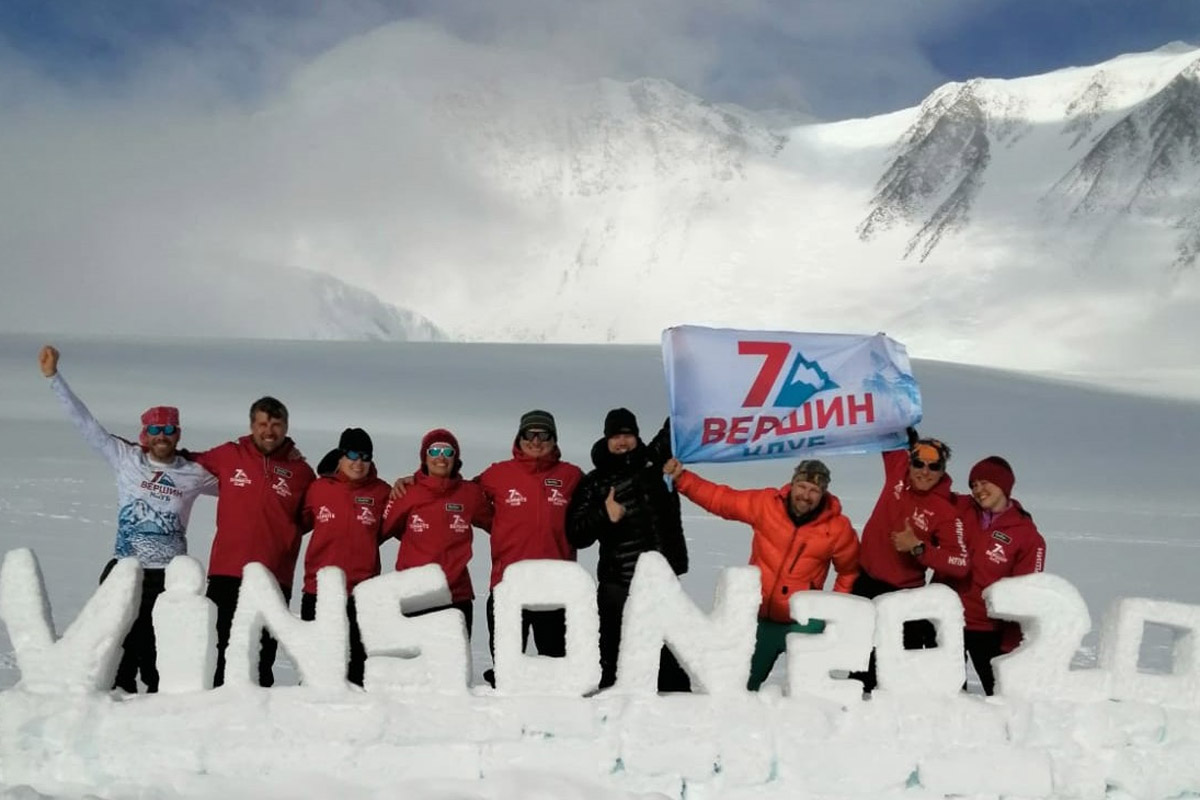 SOFIE LENAERTS – ON TOP OF EACH CONTINENT

In the ensuring years followed successful summits in South America, North America and Asia. It slowly dawned on Lenaerts that she was soon halfway to conquering the mythical Seven Summits challenge, the attempt to scale the highest mountain on every continent. So it was at 19:00 on 10 January 2020 after a seven-hour climb and withstanding bitterly cold temperatures and high winds, along with climbing companions Eva Lakiere and Miguel Madrid Lopez, she took the final, emotional step of the 4892 metres up to the peak of Mount Vinson, the highest mountain in Antarctica. With this, Lenaerts made her own piece of history. The Seven Summits challenge has long been an ambition for many mountaineers. In April 1985, American Richard Bass was the first documented person to climb all seven summits. If joining an elite group wasn’t an historic enough achievement, Sofie also became the first woman in Belgium or indeed the entire Benelux to accomplish this feat. She follows in the footsteps of UIAA President Frits Vrijlandt (Netherlands), a fellow Seven Summiter.

The 44-year old is something of a self-confessed adventure junkie, enjoying a myriad of sports including skydiving, kickboxing, motorcycling, scuba diving, skiing, trail running, kite surfing, speleology, high-altitude climbing and paragliding. In 2018, she ran and cycled 270km in 24 hours, from the lowest to the highest point in Flanders, as an ambassador for the Make-A-Wish “30 days without complaining” campaign.  It is a demonstration of the level of physical and mental preparedness and determination that has allowed her to achieve what for most of us would be impossible, with months of preparation having to go into each climb. The UIAA spoke to Sofie recently to discover more about her achievement, her passion for mountaineering and in line with the UIAA’s own ethics on mountain safety, her belief in responsible climbing.

When did your interest in climbing, the outdoors and mountaineering begin? And how has it evolved over time?

I was invited to go indoor climbing when I was 24 years old. After that this same person took me rock climbing in the Ardennes (Beez, Freyr, Dave). After that came via Ferrata in the Dolomites (Italy) and rock-climbing small mountains (+3000m) in France and Italy. My first “bigger” mountain was Nevado Pisco, 5752m, in Peru. After that I decided I wanted to climb more peaks like this. I went to Ecuador, Nepal, Colombia, Argentina, Alaska and step by step I started dreaming of crossing the 8000m threshold.

Your quest to scale all Seven Summits was a feat which took place over eleven years. At which stage did you really take on the challenge of climbing them all? Was it something you had in mind when you climbed Elbrus in 2009 or is it something which came to you much later?

You have mentioned in interviews only taking calculated risks and getting to the top is really only the halfway point. This is a really responsible philosophy, and one the UIAA through its work across mountain safety promotes. In a world where sometimes people want to achieve things at any cost, how important is it to you that you are a responsible climber, who respects the challenge, the mountain and the mountain environment?

I believe that good decision making can only be achieved by true experience. You need years of practice in the mountains where you need to learn step by step where the dangers lie and gradually you will also learn what your physical and mental boundaries are. If you respect the safety rules in mountaineering, you can reduce the risks to accidents and find a healthy balance between wanting to reach the summit but also knowing when it’s time to commence the ascent and return safely. The mountains doesn’t run away and a patient climber has a greater chance to grow old and tell their story, whereas eager bold climbers sometimes die young.

In terms of preparation and planning, how much time typically went into each expedition (in terms of training, route planning, organisation and what were the most challenging parts to organise)?

For a big expedition like a group expedition towards an 8000m peak, it took one year but when I climb together with my husband (Stef Maginelle – himself an expert climber and first Belgian to climb two peaks above 8000m, without oxygen, during the same expedition), it’s between six to eight months. The last expedition we did was without a Sherpa or oxygen so we only needed to organize the basecamp facilities …something these days is very easy to do. The variety of commercialized logistics organizations is wide spread.  As for training, we try to keep in shape the whole year around and one month before departure we start our hypoxic training. Depending on the physical challenge, we adjust the training where needed. Across the seven expeditions what was technically the most challenging moment, and what emotionally was the most memorable?

The most technical challenge was the Everest North side but not the most beautiful experience, that would be Denali, for I love to climb independently. For Everest and Vinson, I needed to make an exception. The most emotional were Everest and Vinson. Everest because it was my first +8000 m peak and I knew my husband stood on that same point nine years before and Vinson, because it was the last of the Seven Summits. One of the other climbs – not related to the Seven Summits – I learned most from was a solo expedition to the North Side (AD+) of Khan Tengri 7010m in Kazakhstan in 2015 (pictured above). I had to set-up three high camps, using two very small tents. I spent 14 days on the mountain because of continuous bad weather, but made it to the summit even when many other expeditions of male climbers turned back. I had to use fixed ropes from previous expeditions to climb the hardest parts and in a happy coincidence I met three Belgians, two of whom also made the summit. It made for nice company and for me, this climb, is still the most beautiful experience I have ever accomplished.

After a decade long pursuit accomplishing her dream, many people would be forgiven for settling for the quieter life.  An inspiration to climbers in her home country, she will be somewhere new soon chasing her next adventure.  As she says herself, “If you can dream it, you can do it”.