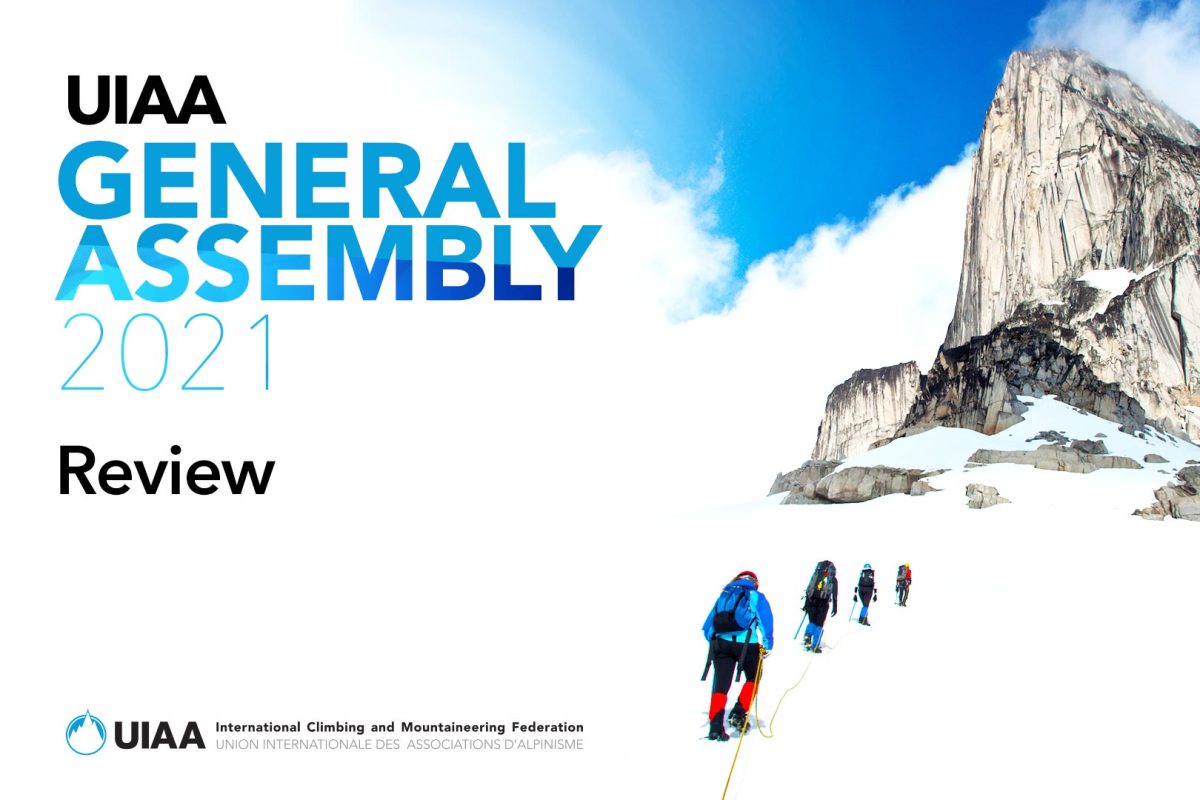 The UIAA – International Climbing and Mountaineering Federation – held its annual General Assembly from 22-23 October. For the second year running the event was held online. A total of 128 delegates from over 71 member associations representing 56 countries attended.

The 2021 General Assembly marked a year since Peter Muir (Alpine Club of Canada) became the federation’s 14th President. Muir, head of a seven-strong Executive Board (EB), assessed the progress made over the past twelve months:

“As I wrote in my annual President’s message, I believe that the UIAA is based on sound principles and a common passion. Over the last year, the Executive Board has been assessing where we are at and what issues we have in order to establish a baseline to measure our progress over the next three years. These assessments are always work in progress. During the General Assembly we will address some common themes. These are – communication, our aim is to be smoother across our various levels and structures and introduce new ways of approaching meetings; an increased focus on the Strategic Plan in particular its goals. It is a very ambitious Plan, so the focus is on narrowing down key goals, and focusing on two-three priority tasks per Commission; assigning responsibilities and clearly defining who is carrying out tasks and ensuring a good pace in our activities while guided by our Articles of Association to take the time required when needed.” The main election activity was confined to representatives of the Management Committee:

Paul Carstensen succeeds Greg Moseley whose term with the Management Committee came to an end. Greg Moseley’s work with the UIAA is the focus of a recent volunteer series article. The UIAA congratulates all new MC members on their elections and thanks Greg Moseley for his support.

In terms of membership, the UIAA continues to represent 90 member associations in 67 countries.

One of the first accomplishments of the current EB was the creation of a number of Working Groups (WGs) to guide the UIAA in the following areas: Commissions, External Relations, Internal Relations, Governance, Finance & Audit and Communication. Below is a brief overview of their findings to date:

Commissions WG: This Working Group has met with all Commission Presidents and attended several Commission meetings. On the basis of these meetings, it has produced a report making a number of recommendations to the Management Committee.

Its next steps include consultation with Commissions, developing a menu of activities, defining specific task list descriptions for each Commission and presenting findings for MC approval.

External Relations WG: This WG has identified and evaluated the UIAA’s 50+ external relationships and is in the process of determining which ones are a priority and further developing partnerships in adventure tourism/travel, sustainability and other multinational federations.

Internal Relations WG: Work is underway with Continental Representatives (CRs) to create a task description for CRs and to work at CR level to strengthen relationships with existing and future members on each continent, with the goal of further developing the UIAA’s continental structures.

Governance WG: Is in a process of assessment. Its role is to be a watchguard for governance and ensure that the UIAA is properly equipped to deal with any issues and implement any changes where required.

Finance WG: Activities have focused on closing out the 2020 accounting year, the implementation of a new accounting software as well as developing the forecast for 2021 and budget for 2022. This active group has also set budget planning guidelines to standardise the budgeting process of Commissions as well as developing more defined Standard Operating Procedures.

Communication WG: Is primarily focused on the distribution of information to members and the wider climbing community. Plans include the further development of communication channels, upgrades to the UIAA website, enhancements to the UIAA Annual Report, supporting Commissions in developing their own publications and scoping potential new information products to offer UIAA members.

The overarching focus of the SP is the question of providing the right benefits to members and ensuring the UIAA is clear on identifying what those benefits are.

This will be guided by the SP’s three key objectives:

A recent survey was conducted among EB/MC members to help define priorities and eliminate any confusion on objectives.

From the survey’s findings, the areas of consensus was:

The UIAA SP remains an ongoing process and further updates will be communicated over the coming months.

On the first day of the GA, a number of panel discussions were held to tackle subjects close to the UIAA’s Strategic Plan and membership.

The panel discussions can be viewed as part of a YouTube replay GA of the here.

A more in-depth review of each panel discussion will be produced in the coming weeks and feature as part of the 2021 UIAA Annual Report.

The 2022 UIAA General Assembly is scheduled to be held on Saturday 29 October in Banff, Canada and hosted by the Alpine Club of Canada. Trabzon, Turkey (Turkish Mountaineering Federation) is set to host the GA in 2023 and Malta (Malta Climbing Club) in 2024.

The UIAA will host its third Mountain Network Series event of 2021 on Wednesday 17 November. The topic will be ‘Mountain Women’ and the webinar built around content from Herstory, a series of short films about the lives of different female climbers. Full details here.

The fourth and final UIAA Mountain Network Series event of 2021 will take place on Friday 3 December (1400-1530 CET) in the form of the UIAA Mountain Protection Award prizegiving.

During the General Assembly, a number of videos were played. Members can access embed codes from the links below.