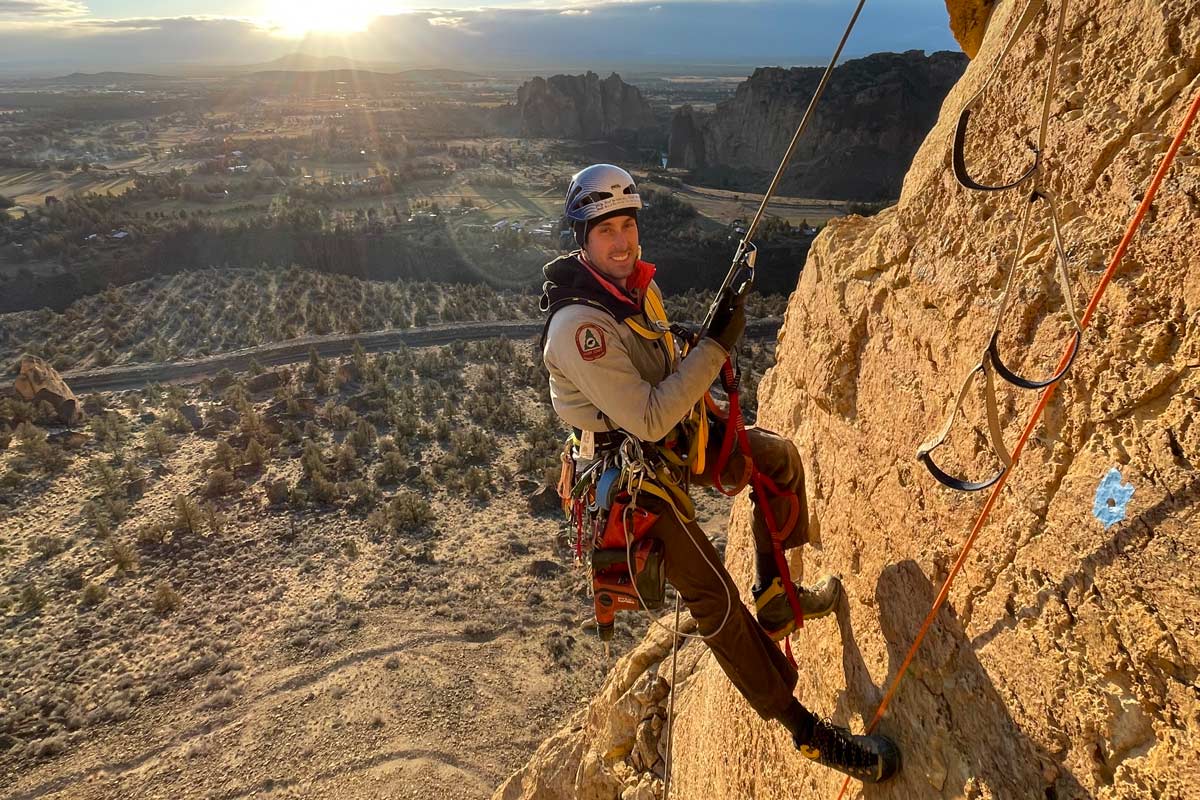 Based in Redmond, Oregon, Stephen Gladieux (American Alpine Club, AAC) is the tenth profile in the UIAA’s volunteer series. For nearly a decade, Stephen has supported the UIAA Safety Commission becoming an official member in 2020. He is one of a number of volunteers who has dedicated significant time and expertise to spearheading SafeCom’s impressive work in delivering Safety Standards of international repute.

ON STARTING WITH THE UIAA

Stephen Gladieux: I started getting involved with the UIAA in 2013 when the work I had been doing with the Thaitanium Project (a non-profit organisation) for some years began to overlap with UIAA SafeCom members. My first contact was probably Alan Jarvis, who is a very memorable character and extremely passionate about climbing safety. I liked that passion, and we started to collaborate on Stress Corrosion Cracking (SCC) studies and discussions. I soon became a corresponding member of SafeCom and contributed for a number of years in that role. I officially became the US delegate to the UIAA Safety Commission in February 2020.

PRIOR KNOWLEDGE OF THE UIAA

I had spent more than a decade on international caving expeditions before getting seriously involved with the UIAA. That environment taught me a lot of respect for the UIAA Safety Label and what it meant for use in critical systems. I don’t think I had a lot of knowledge about the internal processes, but I knew that it meant safe equipment, and that they were safety standards by climbers for climbers.

ROLE WITHIN THE AMERICAN ALPINE CLUB

My role with the AAC is as their delegate to the UIAA SafeCom. I exercise the US vote on our issues. I try to keep folks in the AAC up to date on what is happening in SafeCom and raise any critical issues that might need a larger response, and I serve as an expert to field questions anywhere in the organisation.

I’ve lived in two worlds for most of my professional life: work in the mountains, and in engineering. I spent four seasons guiding professionally, with my focus mostly on ice climbing, then later in my career taught wilderness EMT (W-EMT) courses. On the engineering side I started out in R&D designing novel ferrous alloys and optimising heat treatment processes, along with failure analysis. That spun into doing a start-up on a small research foundry. I spent some years on materials science focused start-ups and turnarounds, including living and working in China. Eventually, I returned to the pure science side and did research into SCC in several alloys and a lot of failure analysis and reliability and safety process control.

INITIAL IMPRESSIONS ON LIFE AT THE UIAA

SafeCom is unique among the UIAA Commissions because it requires both a serious climbing résumé and an engineering degree. I was immediately impressed by several things: the ardour of SafeCom members; the deep technical competence and broad range of members — both in countries of origin and specialisation in engineering; and the professionalism of those involved, especially Stephanie Stettbacher – our fantastic SafeCom administrator. It was exciting. I knew we would air very different opinions, come to consensus and compromise, and would get a lot of work done for climbing safety. I am in a number of different Working Groups (WGs) including the permanent anchor working group and static rope group. I am most passionate about fixed anchors (bolts) because I think there is a lot of misunderstanding about the engineering behind them, and the techniques for placement and inspection. I recently ran the accreditation process for the first UIAA accredited laboratory in North America. I also am managing a project working with IMR labs to study a number of anchor samples and connect their manufacturing and environment to their failure.

I tend to avoid trying to engineer systems and instead focus on individual equipment. For example, the wide breadth of friction in rope sheaths and diameters makes the reaction of assisted braking devices quite variable. If we tried to engineer that system to be more repeatable we’d likely end up with only one rope sold with each device – that’s going too far. Many system challenges have to be met with good training, redundancy, and as much robustness as we can standardise. My main interests with SafeCom are based around materials science. I care about fixed anchors a lot – both from a safety standpoint but also for conservation. I think that in 200-300 years we will still be climbing and our anchor practices will be a problem. Even resin anchors, which tend to have a very long life, will wear out: the resin degrades, they corrode or are worn by lower offs. These anchors are still generally the gold standard, and yet are extremely difficult to replace and that process either involves camouflaging the hole or core drilling it and creating an even larger hole. It is time for a better solution.

I enjoy working where climbing meets engineering. I also very much enjoy working with the other SafeCom members, whether delegates like Per Forsberg, from Sweden, or Lionel Kiener, from Switzerland. The manufacturers are fantastic too. They are so involved and bring so much to the table in this collaborative process. My monthly workload varies a lot. It has been as high as 100 hours during a lab accreditation, or as few as 16 hours if I am just catching up on emails and reading studies. It is usually something like 25 hours.

MOST VALUABLE ASPECTS OF SAFECOM’S WORK

SafeCom gives climbers confidence in their gear. This is especially important when we have a large number of new climbers venturing forth from gyms into the mountains. SafeCom is the reason why their new avalanche probe – whatever the brand – will perform as needed in an emergency. It is, hopefully, something that creates awareness that a cheap sleeve anchor is a poor choice for safety and conservation, and that a plastic, hardware store shovel isn’t a functional avalanche shovel. It keeps manufacturers talking with the community and working with them to improve safety standards and it feeds back into techniques and training.

MY OWN CLIMBING PASSIONS

Do we climb to travel or travel to climb? Here in the US, Smith Rock, Oregon is my home crag these days; and I am heavily involved in teaching rebolting here and maintaining safe routes. My heart always has a special place for the Red River Gorge and Red Rocks. It is tough to forget memories of Céüse, Verdon, Chamonix and Montserrat. For ice climbing my heart will always belong in Quebec and Mad Moose country north of Lake Superior.