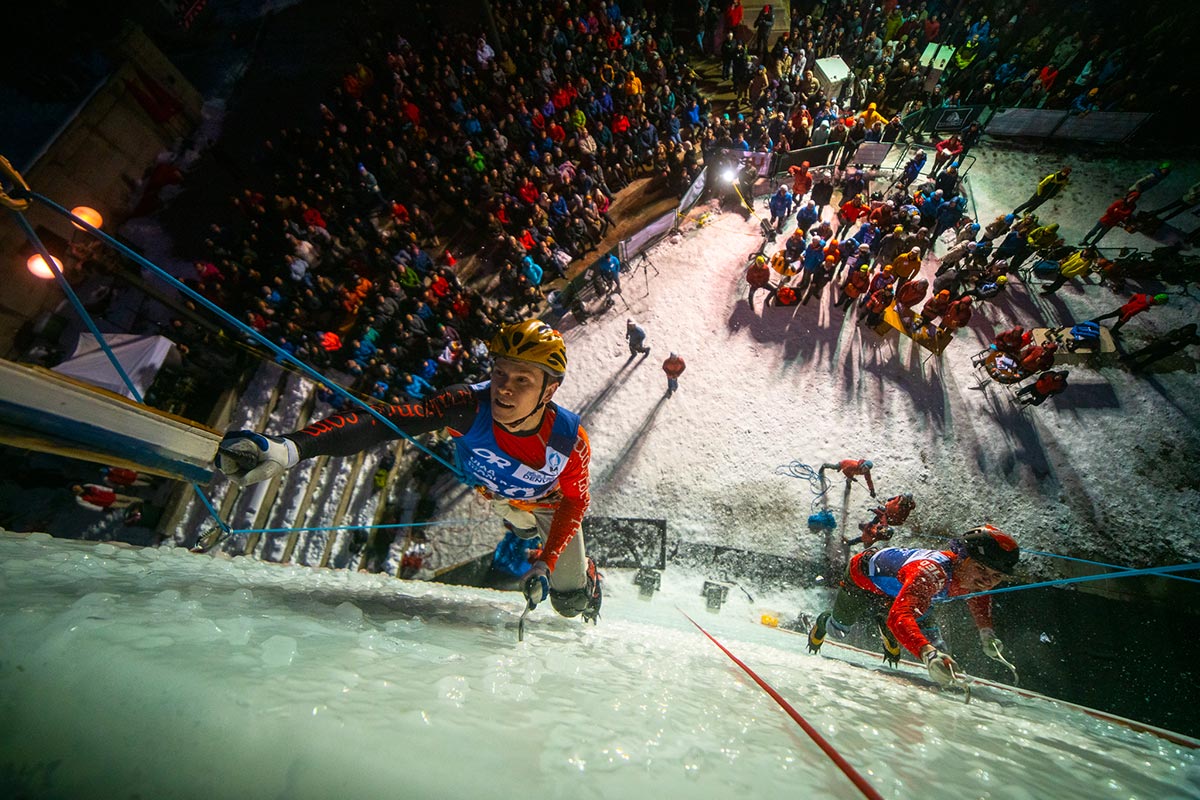 The UIAA World Tour 2019-2020, partnered by Outdoor Research, began in earnest with Bern, Switzerland playing host to the opening European Cup event on 23 November. This was one of four European Cup events held as part of a wider Continental season, allowing athletes to have more opportunities to compete in between the main World Cup events.

Owing partly to some logistical and organizational constraints and a desire to place greater focus on each major event, the 2019-2020 World Cup season is shorter than the 2018-2019 campaign. With fewer gold medals up for grabs and virtually no room for error for the athletes chasing the seasonal World Tour crowns, an intense competition with an excellent international turnout for each event is forecast.

“Although from the outside there are fewer World Cup events and no full World Championships, we are really excited by the 2019-2020 season,” explains UIAA Sports Event Coordiantor Rob Adie. “The three World Cups will all be handled by established and expert organisers and we look forward to putting even greater focus on March’s World Youth Championships. For 2020-21 we are in advanced talks with new organisers with the scope of taking the World Tour to some different territories including new venues in North America following the popularity of the city event in Denver back in February. What this season allows us, with a more condensed programme, is to put more energy and emphasis on each competition.” The season commences in ChangunCity in China’s Jilin Province. This is the third different location for a Chinese World Cup following competitions in Beijing and Hohhot. The expert organization of the Chinese Mountaineering Association will ensure a professional programme under their vision of taking the sport to different regions in China. The two World Cups which follow will take place in familiar territories. Both Cheongsong, South Korea, and Saas-Fee, Switzerland, have long established relationships with the World Tour. At both venues, the atmosphere is electric and routes challenging. Saas-Fee has the honour of deciding the season’s World Tour winners.

In parallel, to its European Cup season, the UIAA will also run an Asian Cup for the first time with an event in Tehran, Iran on 8 February. The Iran Mountaineering and Sport Climbing Federation will host the event which will see competition in both lead and speed disciplines. The European Cup season has already witnessed events in Switzerland, the Czech Republic and Slovakia and closes in Oulu, Finland in March. Already making a strong impression are Swiss athletes Sina Goetz and Jonathan Brown who could both be forces in his year’s World Tour. The season closes in Kirov, Russia with the annual World Youth Championships.

“This season we will continue on the strong development pathway the World Cup Tour is on and continue to push our sport and to focus on the most important element – the athletes. We thank our partner, Outdoor Research, for their support and also all the event organisers and volunteers for their dedication to producing incredibly exciting events,” adds Frits Vrijlandt, UIAA President.

Russian athletes may have taken the ultimate plaudits but success across the season was shared amongst different nationalities. Yannick Glatthard of Switzerland may have taken the lead crown had he featured at all five 2018-2019 World Cups. He claimed two gold medals in his three appearances. France’s Louna Ladevant and Nathan Clair showed continued promise, South Korea’s evergreen HeeYong Park, three silver medals, and compatriot Lee Younggeon, two podiums, will undoubtedly have their say. Iran’s rising star Mohammadreza Safdarian failed to hit the heights of the previous season and will look to return to full form. The men’s speed competition had a greater Russian dominance but the likes of Canada’s David Bouffard, a first ever medal in Denver, and Iran’s Mohsen Rad Beheshti continue to develop. With margins so slender, speed is notoriously difficult to call. Not since 2015, Nikolai Kuzovlev, has an athlete defended his title. Nemov’s main competition will come from the aforementioned Kuzovlev, Vladislav Iurlov, Anton Sukharev and perhaps former world champion Vladimir Kartashev.

Tolokonina is again the defending lead world champion following a fascinating battle with Korea’s Woonseon Shin. Between them they won all of last year’s golds and four silvers. Ireland’s Eimir McSwiggan and Goetz, closest to the leaders last season, will both seek to find that extra bit of brilliance to challenge the discipline’s two dominate athletes. Tolokonina has also enjoyed a fascinating duel in the speed discipline with compatriot Koshcheeva. They start as the two to beat although fellow Russian athletes Ekaterina Feoktistova, Valeriia Bogdan and Natalia Savitskaia are all capable of lightning speeds. France’s Marion Thomas is the standout of those challenging the Russian team together with Finland’s Enni Bertling and Poland’s Olga Kosek.

All the action, live

This coming season will be looking to build on the incredible success and popularity of the 2018-2019 season viewing figures.  With all competition semi-finals and finals livestreamed there were over 1.7 million live views of competition and a reach in excess of 12.5 million people for all video content.

For the 2019/20 season, the UIAA will be working with QTV as a distribution and production partner to ensure the sport is again covered in an innovative, comprehensive and professional manner with great live and non-live content. There will also be media partners in the Extreme Channel and EpicTV, as well as a new television distribution partner Boulder Creek to help facilitate greater terrestrial television coverage.

Livestreaming will be available from the semi-finals and finals of competitions at all events and available immediately as a play-back. Furthermore, highlights of key competition moments such as medal climbs, decisive duels and spectacular moments will be cut as clips and shared on the UIAA social media channels. Commentary this year will come from Tarquin Cooper, RedBull X-Alps live commentator.

A new live results platform is already in operation. Information pages for all World Cup events, including programmes and schedules, are available. The Athlete’s Handbook can be downloaded here.

The UIAA has also created a calendar of international ice climbing events and festivals. Organisers are encouraged to register their events; ice climbers can use the resource to discover festival locations. The calendar can be viewed here: https://www.theuiaa.org/rock-ice-climbing-event-calendar/